My main research topic is real-time crowd simulation, so programming is an important part of my work. My go-to (pun not intended) programming language for research is C++. This page highlights my main projects.

At Inria Rennes, I have been one of the main authors of UMANS (Unified Microscopic Agent Navigation Simulator), a research framework for microscopic crowd simulation. The software is written in platform-independent C++. It is open-source and downloadable via Inria's GitLab. 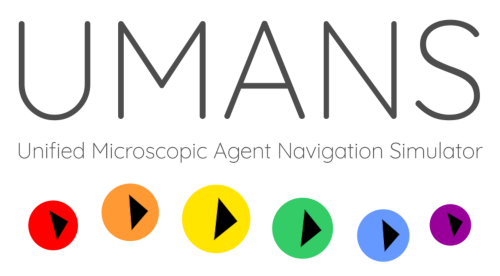 Example of a scenario simulated with 4 different collision-avoidance algorithms, using the UMANS software (2019). Colors and shading were added using a connection to Unity3D. The research related to this was presented at the I3D 2020 conference.

An extreme-density crowd of 10,000 agents in a concert-like scenario (2020). The colors indicate a shockwave propagating through the crowd. The research related to this was presented at the MIG 2020 conference.

During my MSc and PhD time at Utrecht University, I have created the basis for UU's crowd-simulation software, centered around the Explicit Corridor Map (ECM) navigation mesh. This has eventually led to the creation of the start-up uCrowds by my PhD supervisor Roland Geraerts. I am no longer involved in this project, but you can contact Roland for more information if you are interested.

A crowd embedded into Unity3D (2014). The crowd is simulated using UU's crowd-simulation framework as a DLL plugin. Village texture from http://zelda.wikia.com.

A crowd moving on a multi-layered navigation mesh (2011). Generated with UU's crowd-simulation software and the simulation and visualization tools of INCONTROL Simulation Software, where I did my MSc internship.